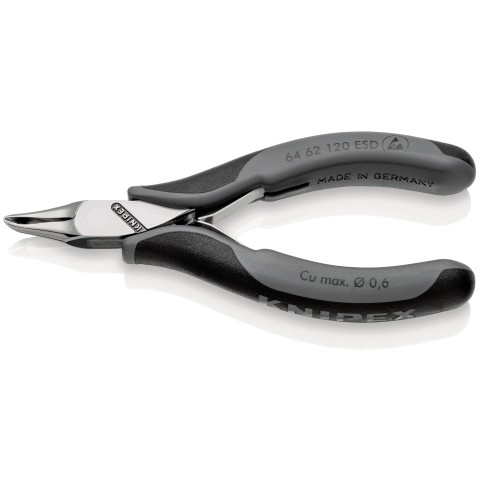 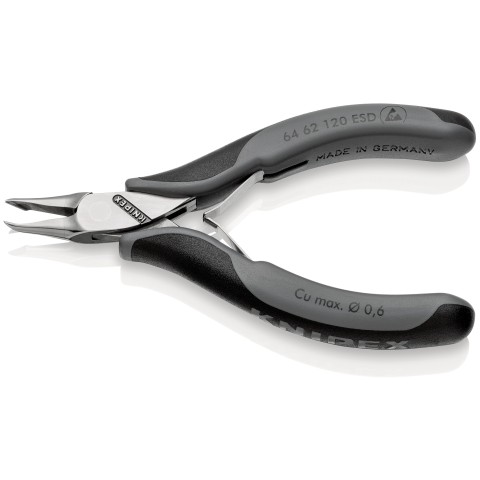 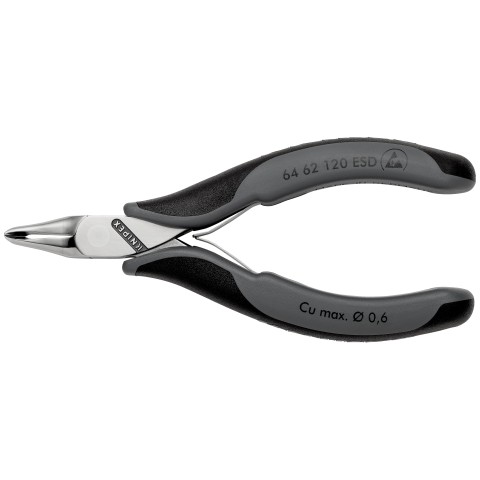 Cutting from the front, at an angle of 65° - almost flush

The ideal tool for tight spaces, e.g. on printed circuit boards, because it is often best to cut from above when space is restricted. Unlike with diagonal cutters, where the cutting edges are a relatively straight extension of the handle, the cutting edges of the Knipex 64 62 120 ESD electronics end cutting nippers are at an angle of 65° to the handles. This permits work at an angle to surfaces from which wire, cable or components are protruding. The power delivery to the cutting edges and the measuring of manual force are both excellent thanks to the good leverage resulting from the short pliers head. The small bevel makes almost flush cutting possible. Due to their design, these electronics end cutting nippers are only suitable for soft wire.

These Knipex electronics end cutting nippers have a smooth operating box joint with zero backlash. Such joints are characterised by the fact that the inner handle is guided on both sides by two extensive bearing surfaces in the outer handle. This prevents the tilting movements which occur with lap joints, and has a positive effect on the quality of cutting processes and tool life. In addition to oil hardening of the entire pliers, the cutting edges are induction hardened to at least 60 HRC. The low friction double spring is an advantage ergonomically. It produces a gentle, steady opening after cutting.

Sudden discharge resulting from electrostatic charging differences is a concern especially in electronics. With the Knipex 64 62 120 ESD electronics end cutting nippers, the electrostatic energy is discharged in a constant, controlled manner via the handles. The handles are conductive – they are not insulating – so that a slow, safe charge equalisation is possible. The rust protection is also safe for sensitive electronic components. Instead of chrome-plating, the Knipex 64 62 120 ESD electronics end cutting nippers have a mirror polish and a fine oil film as corrosion protection so no pieces of chrome can peel off and fall onto printed circuit boards. The mirror polish in conjunction with a fine oil film provides perfectly adequate corrosion protection for the pliers during workshop use if the oil film is replaced occasionally.

Electronics pliers with ESD protection for the finest cutting work, e.g. in electronics and precision engineering